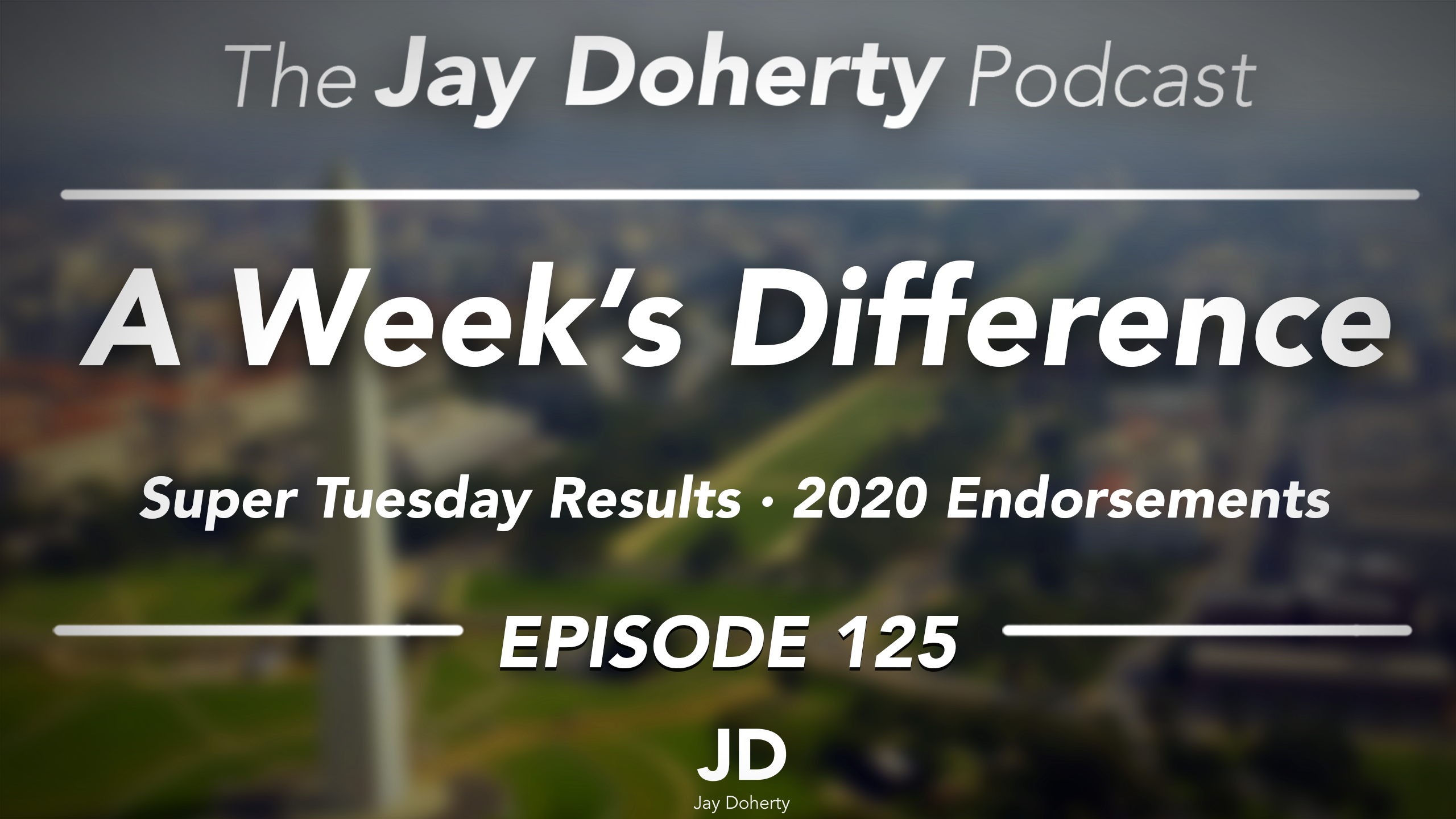 Super Tuesday is over and Joe Biden sweeps through the 14 prized states, earning a majority of the delegates in one of the biggest determiners of any Presidential race. I’ve predicted for a long time that Bernie Sanders already wangled the nomination with his consistent victories in other primaries but is that supposition potentially incorrect after these latest results?

Also, dropouts after dropouts. All within the past week, South Bend Indiana Mayor Pete Buttigieg, Minnesota Senator Amy Klobuchar, Billionaire Tom Steyer, Billionaire Michael Bloomberg, and Massachusetts Senator Elizabeth Warren dropped out of the race for President, all in that order.  How will their endorsements — and the timing of their relinquishments play into how voters decide at the ballot box?

We’ll answer all of that and more on episode 125 of The Jay Doherty Podcast.

After winning South Carolina, Joe Biden needed to win Super Tuesday badly if he really wanted to stay in the race. This race has changed SO fast since last week when I published this podcast… three weeks ago, I would have said that Biden was a total goner in this race… but then he wins a plurality of the delegates in South Carolina and then a majority of the states in Super Tuesday.

The big question every year is who will win California because that is the state with the largest number of delegates. And, expectedly, Sanders won California by quite the margin but that is not actually what lots of the polls projected.

As we know, California is incredibly left of center as a state both locally and nationally but the polls had a radical alternative to Bernie Sanders leading in the state, and unfortunately that radical alternative does not exist anymore. Of course, I am speaking of Elizabeth Warren. We will talk about her relinquishments later but I do think that it is funny that the polls projected she has a pretty generous margin for potential victory in California and then she totally fails in her campaign strategy, in her displeasing attacks through the debates, which all led to her dropping out. I mean she lost big time in her own state!

I don’t want to bore you by going through every single state’s results so let’s just talk about how Bernie reacted to his loss and maybe more interestingly how Biden reacted to his win… we’ll begin with Bernie. He was very energetic, and he basically repeated what he said at every single rally he has ever had… here is Bernie effectively surrendering his victory on Tuesday… SANDERS 1

Joe Biden, as usual, had some gaffs… in the beginning of his speech, he confused his sister for his wife and his wife for his sister which was sort of a classic Joe Biden moment… BIDEN 1

More seriously, though Joe Biden had this to say reacting to his victory… BIDEN 2

Looking ahead into this upcoming weeks primary, we’ll see a less Super Tuesday on March 10 with Idaho, Michigan, Mississippi, Missouri, North Dakota, and Washington voting in their primaries, and based off of some polls from fivethirtyeight and my own observations about the states, I will make some predictions.

READ: DO YOU HAVE ANY QUESTIONS YOU WOULD LIKE TO ASK ME ABOUT LITERALLY ANY OF MY OPINIONS ABOUT POLITICS? IF YOU DO, YOU NOW HAVE THE OPPORTUNITY TO ASK THEM. ALL YOU HAVE TO DO IS TEXT THOSE QUESTIONS TO 312-625-8492 AND AT THE FINAL EPISODE OF EACH MONTH, I WILL BE READING THEM AND DOING MY BEST TO ANSWER THEM RIGHT HERE ON THE JAY DOHERTY PODCAST. ALL YOU HAVE TO DO IS TEXT 312-625-8492, ASK YOUR QUESTIONS AND HERE MY PERSPECTIVE AT THE LAST EPISODE OF EACH MONTH.

Let me begin by saying that there has never been a more consequential week in this 2020 Presidential Election than the week that we just experienced.

*Correction: I suggested that these candidates dropped out in the order listed above when in fact they did not. I apologize.

The big question is who will endorse who, and the general answer is Joe Biden from what we’ve seen from everyone except for Tom Steyer and Elizabeth Warren.

Pete Buttigieg was the first to make the move, and actually the smartest. I am very sad to see Pete Buttigieg drop out… he was far and above the smartest and most talented politician in the entire Presidential race and he was the first to drop out in this slew of recent dropouts… he announced he was suspending his campaign for President in South Bend, Indiana — his home town… BUTTIGIEG 1.

Buttigieg endorsed Joe Biden, no surprise. Buttigieg seemed to hate Biden… and the Democratic Party just cannot fall into the trap of a socialist 1917esque revolution that most people don’t understand… and I think Pete Buttigieg, being the intelligent politician he is, recognized that completely which caused him to endorse Biden. BUTTIGIEG 2

Now the big question for not just Buttigieg but also for all of the candidates who endorse the potential winner of the general election is “what position will they give to that person?” and the answer with Biden and Buttigieg is a bit unclear…. BIDEN 3

I have long said that Pete Buttigieg and Amy Klobuchar were my two favorite Presidential candidates running for office. I thought they were both equally talented… Buttigieg is a much better public speaker than Klobuchar but on a policy level and in terms of fundamental knowledge of American values and ways to progressively develop them, I thought they were the best suited to represent all of America…. And Amy Klobuchar dropped out this past week and also happened to endorse Joe Biden… KLOBUCHAR 1

In terms of positions for Ms. Klobuchar in the future, she did a New York Times Interview in which she sort of goofed up… there is no audio as it was a print interview but the reporter  asked…

Did you discuss any positions with Mr. Biden or anything like that should he win the White House?

I knew every position he had, every single one of them. We did 10 debates. He was on the stage for ——

No, no, I mean, positions in a possible future administration.

Oh, you can see we didn’t because I didn’t even know what you were talking about. No, we did not. No, not at all. I wouldn’t even have thought of doing that. I was endorsing him to help him. And it didn’t even cross my mind to try to make some deal or anything like that.

From Biden’s perspective, the message was a bit different… he appended his remarks about Buttigieg being in his administration by labeling Klobuchar as “talented”. BIDEN 4.

The billionaire is out!

After just 109 days, hundreds of millions of dollars, and an overflow of social media posts of a billionaire septuagenarian trying to look relatable, Michael Rubens Bloomberg has ended his campaign for President and immediately endorsed Joe Biden. BLOOMBERG 1

His spending is astronomical but it’s being slightly exaggerated… MSNBC is being thrown into question after this anti-Bloomberg analyst corroborated incorrect math from someone who tweeted out an incorrect tweet that violates the basic principle of math 327 million times over. MSNBC 1.

This is one of the most embarrassing moments I have ever seen on live TV… I mean all they had to do is simple math… like basic arithmetic… Hey Siri, what is 58.4 BILLION divided by 327 MILLION? SIRI 1

Now the guy who tweeted this out originally is named Mekita Rivas and he changed his Twitter bio to “I know I’m bad at math” so at least he is self aware, but Brian Williams, the host you heard there was being criticized and so is that lady who promoted and corroborated an untrue statement on TV…

Interesting article from WAPO that breaks this down into basic basic terms and also points out that humans’ basic evolution prevents us from understanding the scale of things.

She is sort of the only radical that was hanging on for quite some time and she really complicated things by overstaying her welcome in the race for President. Everyone was dropping out; it was very clear externally and probably internally that the race would come down to Bernie and Biden, but for some reason Warren just continued to exist for no apparent reason.

Here is Warren dropping out. WARREN 1

This reality — her dropping out — is TOTALLY her fault!

If she is going to endorse anyone, which she hasn’t as of yet, she would probably endorse Bernie Sanders as they are as equally radical but Bernie Sanders is less vicious, more relatable, more honest, more consistent, and more likable. On the actual question of endorsements, Warren said that she is holding off for now.

Biden will win the nomination. Buttigieg will get a senior role in the administration. Klobuchar will also. Mike Bloomberg and Tom Steyer will go off and enjoy their billions, and Elizabeth Warren will continue to shriek.

The phone number for this podcast is 312-625-8492. See show notes and episode highlights at jay-doherty dot com. Clips and highlights at The Doherty Files dot com. Thanks for listening. This is The Jay Doherty Podcast.