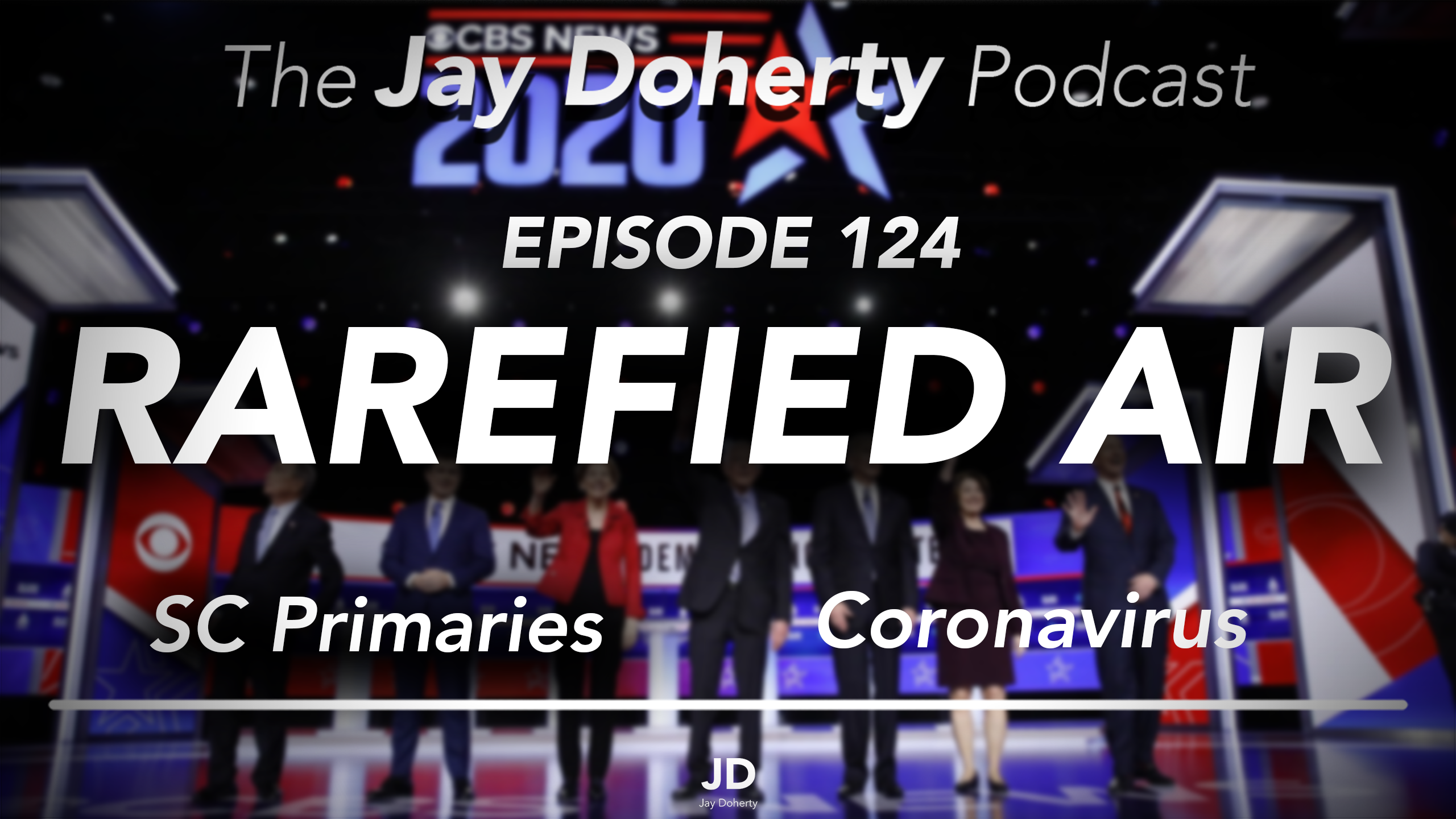 The 2020 Race could go down two paths… Bernie Sanders could continue his frontrunner status or Joe Biden could have the chance to assume Bernie’s coveted role at the front if he wins the South Carolina primary. Who will win that state and to what extent did the recent CBS Democratic debate affect voter’s decisions at the ballot box?

Also, the pressing coronavirus has sent ripples in Washington and around the world. The President seems to contradict his own experts, the stock market continues to drop, and everyday fears of a worldwide pandemic become more prevalent? What pressing political and economic changes have come as a result of the coronavirus, and how long will it carry on for?

We’ll answer all of that and more on episode 124 of The Jay Doherty Podcast.

Using, copying, or redistributing these show notes in any public medium is a violation of copyright and theft of intellectual property.

POLLS AT THE MOMENT

Ah, so first of all I would like to point out current primary numbers….

You may remember that way back before any primaries began, in the very early days of the 2020 race, I was pretty confident that Biden would be #1 across the country in state by state polls and the reason he would be #1 is because his experience in congress on top of serving with Obama and being the established establishment politician would do lots of good for his voting numbers among white, christian, heterosexual, cisgendered males but it seemed like this group is actually looking for something different, and I was slightly, but not completely off.

So Biden still does well with lots of religious white voters but more progressive, forward thinking ones are likely to lean towards Pete Buttieig while more religious voters will probably head towards Amy Klobuchar. And, all of the rest who just don’t like Biden or Obama or the establishment will flock towards Bernie Sanders. The people who really want to just not accept anyone and be an outlier in the entire system will vote for Tom Steyer. Notice how I didn’t mention Elizabeth Warren at all in those sentences. The reason I did not mention her is because she has rendered herself SO irrelevant as of recent. And most of it has to do with how vicious her attacks are at these recent debates, the similarity between her and Bernie, and the simple fact that she is a pathological liar. As we’ve seen from The White House right now, people want to move away from constant fabrication of objective reality.

Speaking of objective reality, a comprehensive poll of all of South Carolina from Real Clear Politics posts some really interesting stats that shows a) that Biden was riding extremely high, nearly 40% in South Carolina in the early days of polling and that b) Elizabeth Warren was trailing him and then, as of recent, she went kaput.

Not good for Warren… she is even doing poorly in her own state!

Back to Biden… I think the biggest problem for him is not the economy, it’s not the capitalist v. socialist, moderate v. progresive battle, but it is his age. The simple fact that his mind has started to move faster than his mouth at his age has really shined more statistically negative light on him and his campaign. I am by no means saying that your age as a number determines how qualified or unqualified you may be… it is all about how you act and how you percieve yourself…

Bernie Sanders is a year older than Biden at 78 years old and he is super enthusiastic about everything, so much so that he had a heart attack!

That is where things stand now in terms of statistics….

READ: DO YOU HAVE ANY QUESTIONS YOU WOULD LIKE TO ASK ME ABOUT LITERALLY ANY OF MY OPINIONS ABOUT POLITICS? IF YOU DO, YOU NOW HAVE THE OPPORTUNITY TO ASK THEM. ALL YOU HAVE TO DO IS TEXT THOSE QUESTIONS TO 312-625-8492 AND AT THE FINAL EPISODE OF EACH MONTH, I WILL BE READING THEM AND DOING MY BEST TO ANSWER THEM RIGHT HERE ON THE JAY DOHERTY PODCAST. ALL YOU HAVE TO DO IS TEXT 312-625-8492, ASK YOUR QUESTIONS AND HERE MY PERSPECTIVE AT THE LAST EPISODE OF EACH MONTH.

Last debate, Michael Bloomberg was attacked with tons of different lines and attacks from pretty much everyone on the stage… which was not smart. Compared to other candidates, Bloomberg is not doing particularly well in voter turnouts… he is starting to increase now that he’s poured a couple hundred million dollars into the race but the overall state numbers for Bernie Sanders clearly installs him as the national frontrunner. In the Las Vegas debate, Bernie should have been getting all of the heat… it took the other Democrats a second to realize it but they finally have, and instead of going after Bloomberg the entire time, they went after Sanders in this most recent debate. We’ll circle back to Sanders in just one second.

So, throughout this entire thing, the funniest part was to see the scriptedness of Pete Buttigieg… I have to say that Pete Buttigieg was such a better candidate when this race started than he is now. He is way more progressive than when he originally began, he started to get way more cocky, and he is taking WAY too much advice from his advisors on how to speak in debates. One of his many scripted lines was at the South Carolina debate in which, again, he basically used synonyms to make the same point that there is a binary political theory surrounding this 2020 race that decides between two radically different ends of the same party based in values and principles from different countries and time periods… here is Pete Buttigieg using one of his scripted lines once again… BUTTIGIEG 1

Just to substantiate my claim about scriptedness, here are a couple of other times Buttigieg has said some outwardly predetermined statements on the debate stage… I realize that all candidates do this sort of thing but there is just something about how Buttigieg delivers them that make them stand out as more scripted than others… BUTTIGIEG CYCLE 1 & 2 & 3

Mike Bloomberg had a slightly better preset statement in which he sort of played on the idea that there is some major Russian conspiracy to intervene in U.S. Elections this year and that Russia wants Trump to be their next President… pundits believe that Bernie Sanders is the most easily defeatable by Trump… Russia wants Trump to win….  so by transitive property, the Russians want Bernie Sanders to win the primary and subsequently proceed to be smashed into pieces by Trump in the general. Mike Bloomberg, always looking on the horizon, used that as a con of voting for Bernie… BLOOMBERG 1

In a separate discussion about China and super broad ideologies as a country which was, for  some reason an extensive topic of discussion at this most recent debate, Bernie Sanders was quite passionate in his defense of defending authoritarian governments… SANDERS 1

No one could keep their mouths shut at this thing…

The moderators at these debates are usually good but, at this one, they sort of lost control….

The forward thinking, equity-based party is thinking about whether or not their billionaire candidates could support their nominee, who is likely going to be the nominee for becoming the President of a trillion dollar country. And, of course, Bernie Sanders is tentatively projected to be the nominee of the race and the big question is… will Bernie accept money from billionaires like Michael Bloomberg?

The answer is a bit confusing and here is why… it all started when Anderson Cooper over at CNN… he was moderating a town hall in which Anne Leitcher, a former school teacher asked Bernie if he would at all consider accepting a donation from Michael Bloomberg if Sanders did indeed win the nomination… It took him about three minutes of dodging the question until he flat out refused to answer it. Here are Bernie’s lack of response and then eventual response to that question and don’t worry it changes…. SANDERS 2

Now the given in this question is that Bloomberg would be willing to actually financially support a candidate… and it turns out he is willing to do that…. BLOOMBERG 2

What you need to know… https://www.nytimes.com/2020/02/26/us/politics/trump-coronavirus-credibility.html

Trump has made some interesting claims about the virus and they do not seem to be rooted in medical knowledge whatsoever, but rather tend to calm the political and economic storm that could come as a result of this virus. Here is Trump being asked whether or not he thinks coronavirus is more of a political and economic crisis or a health crisis…. TRUMP 1

Now, the other thing Trump’s administration is trying to do is say that this is another partisan draw up of lies that only exists to defame Trump which is not the case at all. It is, in fact the opposite. It originated in a foreign country, the Democrats have suggested different solutions to solving what could be a worldwide problem, and that has how politics has gone for the past millennium. Here is Trump at a rally the other day saying that the Democrats are trying to use coronavirus as their next takedown method… TRUMP 2

It turned out the President was sort of echoing more bluntly Mr. John Michael Mulvaney, otherwise known as Mick Mulvaney who said this at CPAC the other day… MULVANEY 1

So, clearly, The Trump Administration has a political agenda surrounding the coronavirus but that can easily become very troubling very quickly… and it did. The problem is when you have two fields in a cross over and each of those fields deal in objective and subjective reality, there is always conflict. The subjective reality at play here is politics and the objective is medical. Alex Azar, Trump’s appointed health and human services secretary basically walked a true statement out that the President didn’t like and then backtrack with praise on The President’s behalf, who by the way was standing directly behind him when he said this at The White House Podium the other day… AZAR 1

As of just a couple of hours ago, Trump was at the White House podium being slightly more realistic about coronavirus… here he is addressing the premise of the problem… TRUMP 3

While delivering these facts, Trump also wanted to give his best shot at damage control… here he is advising the media and local political elites to not cause a panic…. TRUMP 4

Mike Pence, who is the appointed head of Trump’s coronavirus “task force” praised Trump too at a press conference that was held at that same conference a couple of hours ago. PENCE 1

So what is the motivation behind all of this? Besides keeping the social fabric of America tied together with safety for everyone, why on earth would Trump continuously mislead people into thinking coronavirus is not as bad as people are saying it is?

Well it is because of the stock market!

https://www.nytimes.com/2020/02/28/business/stock-market-today-coronavirus.html
Now is a great time to buy! And if you want the President’s half-answer, we’ll refer you back here… TRUMP 1