The 2020 Race continues with the most recent NBC News Debate being a breaking point for the Democratic Party; they now like tearing EACH OTHER apart. Mike Bloomberg comes on the stage but isn’t welcomed, Elizabeth Warren ruthlessly attacks the billionaire former mayor, Bernie Sanders does his best to avoid attacks from fellow candidates, Joe Biden tries to prove that he still politically exists, Pete Buttigieg attacks Sanders and boasts his successes in Iowa and New Hampshire, and Amy Klobuchar partners with Warren while admonishing everyone else. And ALL of this makes for amazing, and highly-rated television. Who won and why was this debate so gruesome?

We’ll answer all of that and more on episode 123 of The Jay Doherty Podcast.

Using, copying, or redistributing these show notes in any public medium is a violation of copyright and theft of intellectual property.

Ah, so first of all I would like to point out current primary numbers….

These high numbers for Sanders were not a surprise generally. The candidates knew this off the bat, especially considering the state-by-state votes in the primaries and caucuses. Sanders has also been the one who has raised the most money by individual donors, he has arguably the strongest and largest movement, he just has captivated the non-establishment majority’s attention AND has appealed to a crowd of all different ages, races, states, communities, and backgrounds. Those are all things that Bernie has done within the race itself.

Michael Bloomberg’s principal accomplishment within this Presidential race is spending about $200 million. Now, look, the guy obviously has one of the most impressive track records in the history of this country… starting a company from relatively humble beginnings, building it up, becoming a three-time mayor of a city, starting a news company, and becoming a deca-billionaire, all in one lifetime is something that he can only say… so the guy has quite the ethos, especially considering that he wasn’t born on third base.

Anyway, it was the first time Bloomberg had appeared on the debate stage since announcing his run and he was the main target. He shouldn’t have been; Bernie Sanders should have been…. He has the strongest movement and with greater poll numbers comes less loyalty… so the other candidate on the stage should have been focusing on swaying Sanders voters to them, not attacking Bloomberg, a guy who’s best national poll puts him relatively low considering how much money and experience he has. The only guy who was in his right mind during the debate was Pete Buttigieg, and to be honest, it could not have gone better for Sanders…. If Bloomberg were not on that debate stage last night, Bernie Sanders would have been utterly DECIMATED.

The candidates seemed to think that Bloomberg is their biggest rival when it was actually Sanders. There is a chance of that changing but the only way Bloomberg has the opportunity to exert direct influence over said change is by spending more, and I really don’t know how much more you can spend… that is said hyperbolically and not meant to incite Bloomberg.

This analysis will go all over and generally in sequential order, but hopefully the structure makes sense…

Michael Bloomberg was immediately the subject of everyone’s deflective attacks. Bernie Sanders had the first question of the night, and he immediately attacked Bloomberg on his record with stop and frisk. Here is one of the moderators, Lester Holt, asking Sanders this question… it was sort of a “you ask the question and I’ll respond with whatever I want to say” sort of question… SANDERS 1.

So, the Senator brings up stop and frisk. I sort of understood the concept when I first heard about it but I wanted to learn more about it and the way that Bloomberg feels about it and I’ve found some interesting stuff. 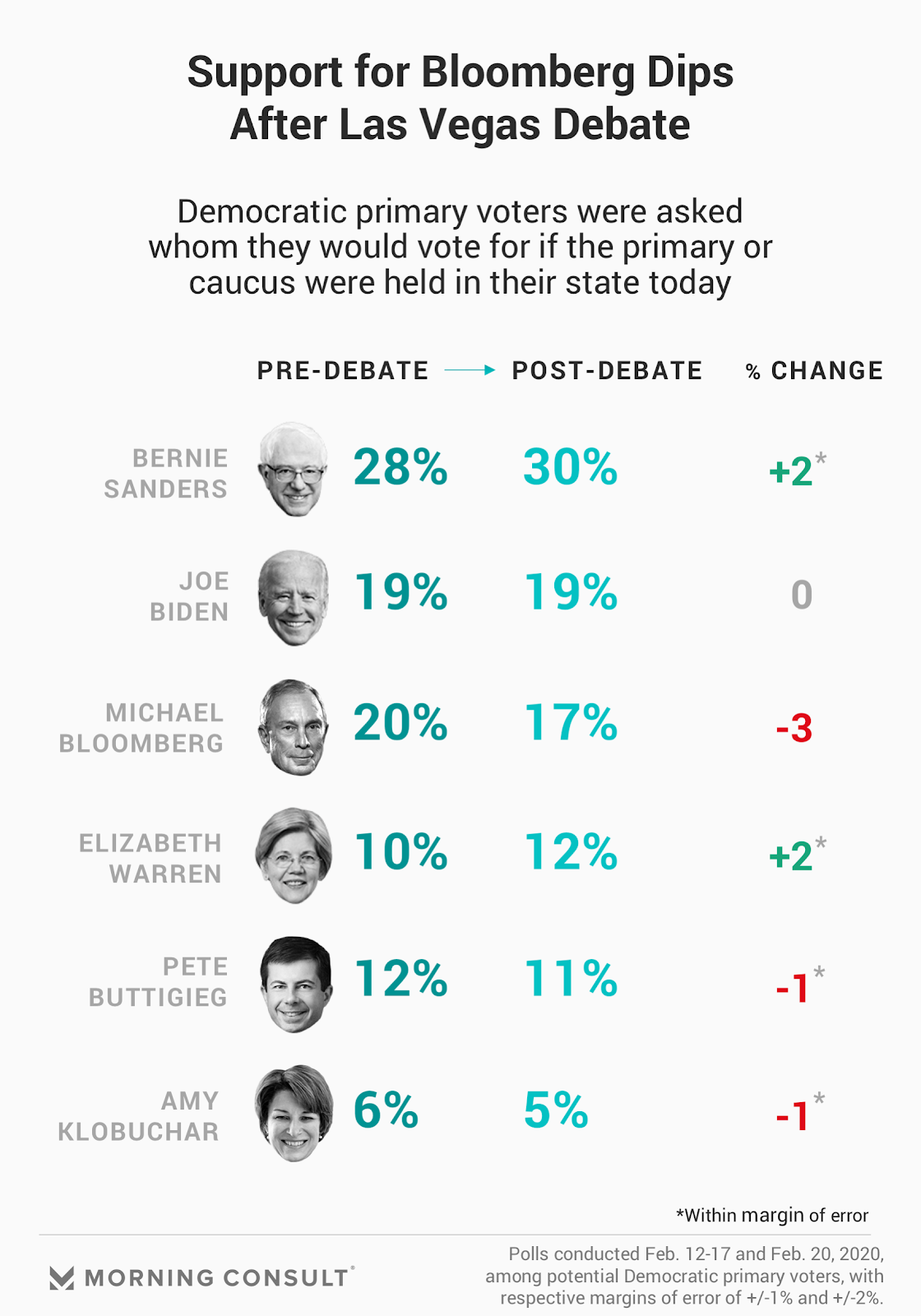 During this exchange, and keep in mind, this is only about 4 minutes into the race, Elizabeth Warren, who is far and above the WORST Presidential candidate, said this in hopes of restoring her place at the top of the polls like she had a couple months ago… WARREN 1

Super scripted! And it hurt Bloomberg. The reason it hurt Bloomberg as much as it did is because he had absolutely NO IDEA how to respond to any of this. He literally just sat back and took it, and meagerly would fight back when the water was calmer. He didn’t even show annoyance with Elizabeth Warren’s accusations and his best defense was succeeded by a scripted line going through his credentials. This was far and above the best line for Bloomberg in the debate and for the purposes of being fair, I am going to play the entire thing because the other 99% of what he said was poorly executed. Here is Mike Bloomberg making the elevator pitch…. BLOOMBERG 1.

That was the best part of last night for Bloomberg and that wasn’t even that good! The reason it is not good is because the premise of the argument is that we need to get rid of Donald Trump… not I am the best guy to replace Donald Trump… so I think Bloomberg has quite the axe to grind with Trump, and that is probably a big reason as to why he is running.

It drew some understandable criticism from Pete Buttigieg, the half/half socialist capitalist that has done well so far but is likely going to decline immensely in the upcoming primaries. Buttigieg had a great line that sort of pragmatized the debate situation in the long-term but this was his one shining moment and from here on, his campaign will slowly and sadly go down the tubes. BUTTIGIEG 2.

Another moment that really helped, and again, this is evidence that, in terms of OFFENSE strategy, Buttigieg was the most well-equipped. The most well thought-out blitz was when Buttigieg quarreled with Sanders about their campaigns’ support of the working class. BUTTIGIEG 1

Buttigieg also had a good moment indirectly when a moderator asked Amy Klobuchar about a recent article from the AP and an interview with Telemundo. This article was not publicized much in the early days of its release but it was very important, and I am glad they asked about it on the debate stage… in fact, Amy K. I am going to play a snippet of last week’s episode in which I talked about this amusing article from Telemundo and the AP. This is from episode 122 of The Jay Doherty Podcast… TJDP 1

Now, Steyer wasn’t on this debate stage obviously but Klobuchar was and she was given the opportunity to respond, which no matter how good her response was, it was automatically going to be a victory for Buttigieg… Klobuchar said this… KLOBUCHAR 2

Don’t we know that? Remember when she forgot Laura Kelly’s name and she brought her up unsolicited in a prior debate…. KLOBUCHAR 3

While Klobuchar is a really good candidate (one of the best), she just lacks the drive and the public speaking ability to be a good President… I just feel that way… she threw out a bunch of hypophoras at herself like a boomerang trying to prove she has trivial knowledge… KLOB 1

It wasn’t all good for Buttigieg though. Elizabeth Warren attacked him pretty harshly, as she did with literally every single candidate on the debate stage except for maybe Joe Biden…. Not sure what that’s about, but I mean just listen to Warren candidate spewing lies and being hypocritical while doing it, particularly at the end of this predetermined monologue about healthcare… WARREN 2

To which Buttigieg wittily responded…. BUTTIGIEG 3

Why did she do this… and why is the main focus of almost every debate healthcare…. Because IT MATTERS TO the people… everyone needs it, polls show people care too.. https://wgnradio.com/2020/02/21/8-news-nowemerson-college-poll-shows-health-care-environment-are-important-issues-with-nevada-voters-tmw/

Funny how she is saying that she shouldn’t attack everyone when she is literally attacking everyone on stage. All of this balderdash from Warren was generally perceived to be the equivalent of a squawking buffoon exhorting statistical popularity.The one thing that did ruffle some feathers post-debate was when Warren mentioned non-disclosure agreements that Bloomberg had with female employees. BLOOMBERG 2.

Now, NDA’s for the rich and powerful and frankly all corporations are commonplace… not just for scandalous endeavours, which seems to be the case here. But there are hundreds if not thousands of companies that request employees to sign NDA’s to ensure that trade secrets, copyrighted information, and intellectual property isn’t leaked before it is released…. I mean how do you think Apple keeps their products secret for so long?

Nonetheless, there was an awful response from Bloomberg there in which he basically answered the question without any motivation or elaboration on what he was talking about. Just crazy.

So that is kind of funny, and then, then we have the real show-stopper… Bloomberg attacked Sanders for being a self-proclaimed Democratic Socialist while being a multi-millionaire who happens to own 3 houses… pretty funny stuff and an amusing defense from Sanders… BLOOMBERG 4